Excellent exterior! A few days ago, this Ferrari 599 GTB Fiorano installed BONOSS Forged Active Cooling Wheel Spacers, front 25mm (1 inch), rear 30mm (1.2 inches), PCD 5×114.3, CB 67.1. Wheel spacers create an additional clearance between your wheel and the vehicle hub. An ideal distance between your car’s wheels quite actually makes it more stable. They also increase the traction during cornering and can allow you to add larger wheels. If your new wheels set up do not have the proper offset, it will cause the wheel to rub against the internal suspension components. (Wheels will stick in too much). You can also add larger brake kits, which is a great safety upgrade for your Ferrari 599. (Thanks Format Awagger for Supporting.)

The Ferrari 599 GTB Fiorano is a grand tourer, which has been praised for its great looks, beautifully built interior, superb technology, and superior ride quality. It has been called one of the greatest Ferrari road cars ever – until the next model arrives. A thrilling 6.0 L V12 engine utilized in the 599 produces a maximum power output of 612 hp at about 7,600 rpm to 8,400 rpm, making it the most powerful Ferrari road car at the time. Every turning, every speeded-up, every control is powerful and exciting.

What are Hub-centric Wheel Spacers?

Hub centric wheel spacers mean wheel spacers with small rings of metal made with specific diameters to fit the wheel hub, transforming a lug-centric wheel into a hub-centric one. They are designed to make a snug connection between the wheel and axle hub, ensuring the hub carries the weight of the car instead of the studs or bolts. This allows the wheels are truly central to the vehicle hub, meaning no high-speed vibrations through the wheels. Meanwhile, hub centric wheel spacers also reduce the stress on the wheel studs or bolts, improving service life range. BONOSS optimized this design to improve the performance at maximum possibility.

There is a specially designed heat dissipation grooves structure that exists on the active cooling wheel spacers. The grooves can make use of the wheel spacers rotation to allow the external cold air to flow efficiently and continuously inside the wheel spacers to take away the heat, so as to achieve the purpose of actively dissipating heat for the braking system. The grooves are distributed in a petal shape, which allows multiple grooves to work at the same time, improving the heat dissipation efficiency greatly. Through this way, it can improve braking efficiency, and reduce driving safety risks. 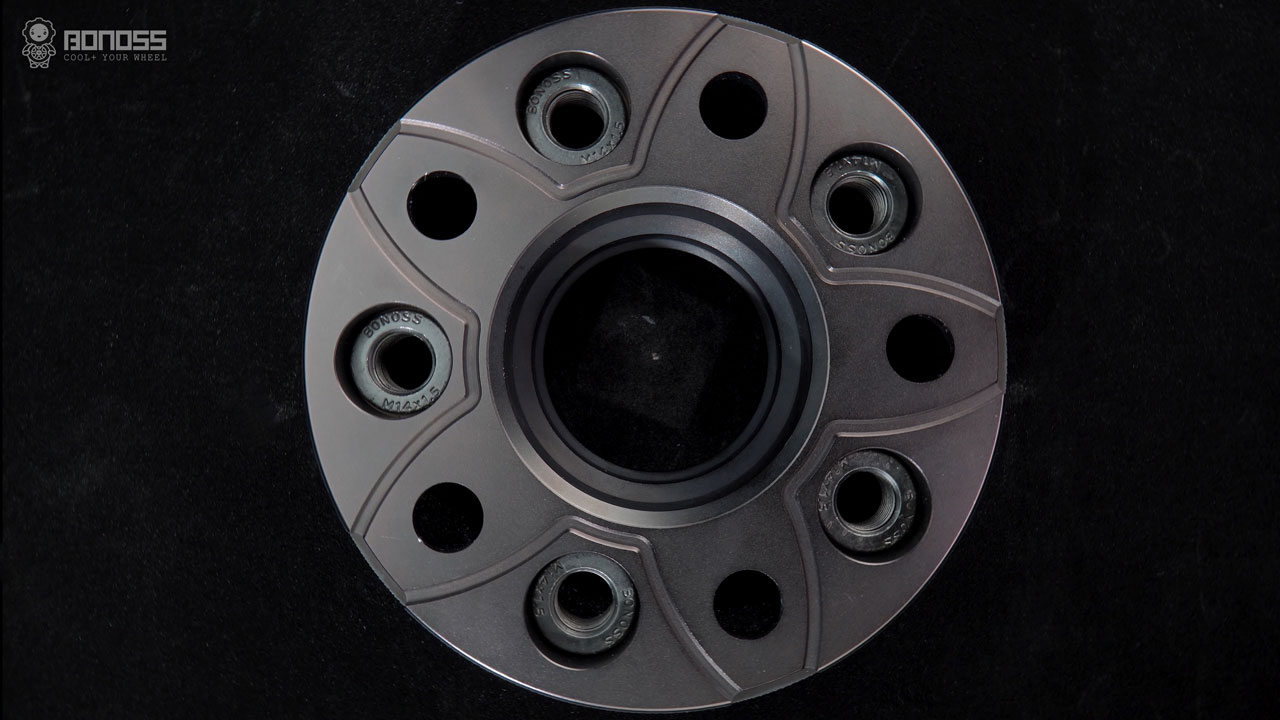