How to Protect 2022 Toyota Harrier Wheel Spacers from Rusting？

Do Toyota Harrier wheel spacers rust? Metal parts may rust to varying degrees after a long period of use. These rusts come from water and oxygen in the air, especially if the vehicle is often driven in wet areas. When metal rusts, an oxide layer will be generated on the surface. If the metal is not descaled, the metal will continue to react with oxygen and water, and the rusted part will become more and more, affecting the work of the parts.

BONOSS Toyota Harrier wheel spacers use aluminum alloy material, rust is a slow oxidation process, most of the metal will rust, the alloy by adding different metals to enhance anti-corrosion performance, aluminum alloy in the oxidation process will generate a layer of dense aluminum oxide protective film on the surface to prevent the internal metal continue to react with oxygen, Toyota Harrier wheel spacers surface will also naturally generate oxide film to protect themselves, but the oxide film alone can not protect the car parts.

Toyota Harrier wheel spacers parts including wheel studs and lug nuts, BONOSS also treats these parts to prevent rust. By far, the Dacromet-coating lug nuts are considered to be one of the best corrosion-resistance nuts. This type of coating gives salt spray resistances exceeding 500 hours, which makes it ideal for fasteners in the automobile industry. Most importantly, Dacromet coating does not induce Hydrogen Embrittlement, which means that high-tensile components like wheel bolts and lug nuts can be safely coated.

However, Toyota Harrier wheel spacers will be prevented from rusting by good design. 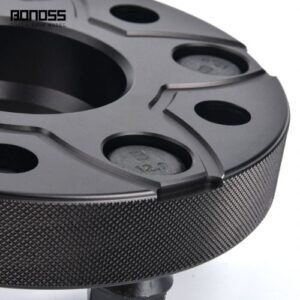