It is easy to notice that there are wheel spacers of different materials that exist on the market. When choosing safe wheel spacers, material selection can be very important. There are steel, 6061, 6061-T6, 7075-T6 Aluminum. Which one is suitable for your vehicle mods?  Pick up the right ones, you will not only get rid of wasting money on trash but also have a perfect experience each time you speed up and drive smoothly. 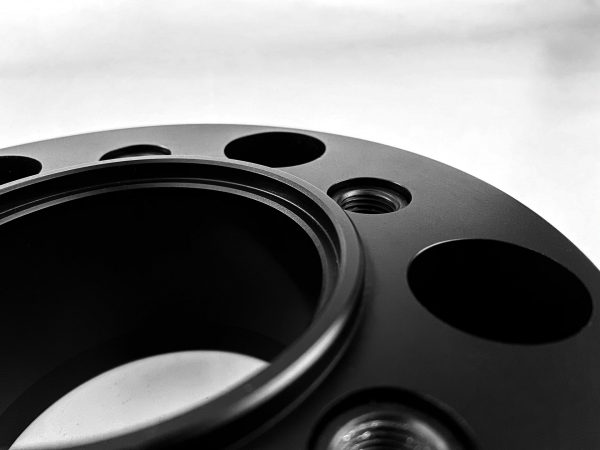 6061 Aluminum is an alloy which developed in 1935, it was called “Alloy 61s” at that time. Today, it is usually referred to as “structural aluminum.” In contrast to casting alloys, it is a wrought alloy. Therefore, it can be extruded, rolled, or forged into specified shapes. This alloy features medium to high strength. The corrosion resistance, weldability, workability, and machinability are also good. It is usually applied to building products, electrical products, piping, and recreational products.

6061-T6 Aluminum is 6061 Aluminum in the T6 temper. 6061-T6 represents the temper or degree of hardness, also represents the method of hardness obtaining. For example, 6061-T6 Aluminum alloy, the “T6” indicates that it was solution heat-treated and artificially aged. The structural strength, toughness, and corrosion resistance are improved greatly through tempering. It also features good finishing characteristics and responds well to anodizing (including clear, clear and color dye, and hard coat). The 6061-T6 Aluminum alloy is strong and lightweight, what’s better, conducts and dissipates heat, the non-corrosive ability is also well.

Both 6061-T6 and 7075-T6 are high-performance Aluminum Alloys. Both are furnished in the T6 temper. 6061-T6 is mainly made of aluminum, magnesium and silicon, plus small amounts of iron, copper, manganese, magnesium, chromium, zinc and titanium. It has a high toughness characteristic, which means that it can be forged into specific configurations, meanwhile maintaining a very hard strength. As it is so tough and strong, the 6061-T6 is widely used to build various products, from airplane parts to automotive parts, and so on. In addition, 7075-T6 aluminum uses zinc as the main alloy agent. It also has a higher composition of magnesium and copper than 6061-T6. Such an alloy mix makes the 7075-T6 Aluminum hardness as good as many steels, but the weight is much lighter. Compared with 6061-T6, its strength and toughness are also greatly enhanced. The tensile strength of 7075-T6 is nearly double that of 6061-T6. The hardness of 7075-T6 is about 1.5 times that of 6061-T6. Given its excellent performance-strong and lightweight, the 7075-T6 Aluminum Alloys is applied extensively to Aerospace aircraft building and boat construction.

In comparing the strength of steel and Aluminum, technically steel is harder and stronger than Aluminum. The high concentration of carbon contributes to its overall hardness but also makes its weight heavier. Besides, its strength means that it is unlikely to bend or stretch. On the other hand, Aluminum is much more malleable than steel, meaning it can be perfectly extruded or forged into specific custom shapes without breaking or cracks. What’s more, under the same volume, Aluminum is lighter than steel (on average, steel will be 2.5x denser than aluminum). The other important feature is that in cold-weather conditions, aluminum actually becomes stronger. One of the key benefits of Aluminum is that it is protected by its own naturally occurring oxide film, which brings it incredibly resistant to corrosion. Yet, most steel does require a coating of paint or other finish treatment to protect against rust or corrosion, its corrosion resistance is not as good as Aluminum. In some cases, the hardness of Aluminum (such as 7075-T6 Aluminum) has indeed reached the standard of steel but with lighter weight, higher malleability, and better corrosion resistance. Perhaps steel wheel spacers are cheaper, but in fact, Aluminum wheel spacers are safer and more cost-effective.